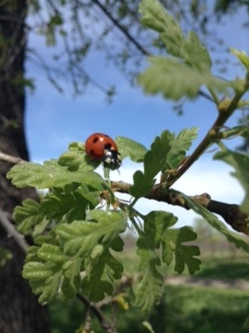 Photo Credit: Carli Newman
The story of One Ladybug is linked to my daughter’s cancer journey and has become her totem.  Not only did I learn later the ladybug symbolizes healing in many countries, but one appeared on her arm in the middle of her sickest hour, inside the most sterile hospital environment imaginable.   A nurse was horrified it might compromise her immunity and told me to kill it, but instead, seeing the joy it brought my daughter, I scooped it up and told her I would take it outside and set it free.  It stayed on my hand down a 4-flight elevator ride and out the building.  A gentle reminder healing comes from our connection with the natural world.

I hold nothing but respect for the nurses and staff who do their job by maintaining a sterile environment in hospital floors where people have compromised immune systems.  My intention here is to remind us how our connection with the natural world can be a potent healing source alongside our best medical practices.

Because so many have kindly expressed concern, I need to let you know my daughter is now a thriving teen who captured this photo of a ladybug here! 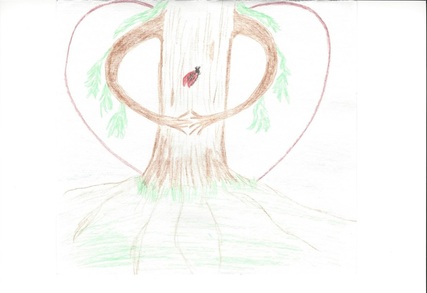 I was moved to tears and made this sketch when I learned a nonprofit organization is being created right now to open its doors in 2017 called Ladybug House. This will be only the 3rd such end-of-life care housing for young people and their families in the entire United States.

If you listen to the end of the radio interview about Ladybug House HERE, it turns out my daughter's experience of a ladybug landing on her arm in the middle of winter at Seattle Children's Hospital in 2005 in the most sterile environment possible was not the only one.  It happened to others.  The most rational mind would explain possibly there is a several-year ladybug infestation in the air vents of a cancer floor of a children's hospital (not likely as maintenance crews will say).

Whether or not this can be rationally explained, it is powerful that the ladybug landing on the shoulder of a young person in treatment for a life-threatening illness became a vision seed to start organizations that serve others.  If the presence of a tiny beetle can be a catalyst for someone to discover an entire field of inquiry and healing (ecopsychology) and devote years to study, I have come to personally believe anything is possible.